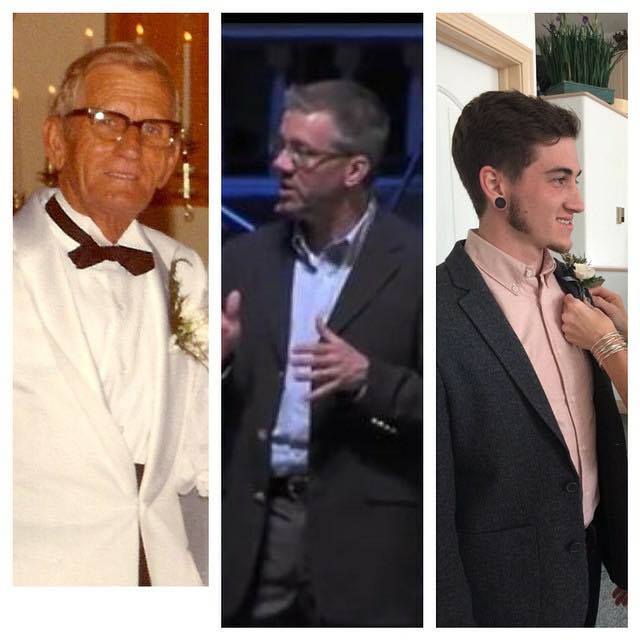 A good name is to be chosen rather than riches… A good name is better than precious ointment… (Proverbs 22:1 and Ecclesiastes 7:1 ESV). Recently I’ve been thinking a lot about my name. It’s a good name. In fact, it’s such a good name that Melanie and I passed it on to our son – Robert Milton Paul III. I am the second person in our family to hold this good name. He is the third. No pressure son, but if/when you have a son…

It is a good name. It came to me that way. I hope I have shepherded it well. I’ve tried. Yes, I’ve made mistakes. There is a lot I would like a chance to do over. But that’s not the way life works. Like everyone else, I am a broken human being in desperate need of mercy and grace. Too often I reflect the messiness of the world around me more than the righteousness of Christ in me. But overall I have taken care of this name that my father gave to me, and I have passed it on to another generation.

It is a good name. A name that was forged in the poverty of the rural south a decade before the Great Depression brought similar poverty to the rest of the nation. My father was born in Birmingham, Alabama on September 30, 1920. I never met my grandfather (his good name – Joseph Houston Paul – was passed on to my brother and then to his son). My grandfather was a World War I veteran who came home to Alabama after the war. My dad was the middle child of three sons.

In those days Birmingham was a relatively young and growing city. I am told that my grandfather was a carpenter and that his skills were utilized in building the palatial home of former Birmingham Mayor, George B. Ward on the crest of Shades Mountain in what is today Vestavia Hills. Ironically, I am writing these words in a Starbucks at The Vestavia City Center just a few blocks from that site and a few blocks from where my daughter lives with her family. When I was a child, my dad would remind us of my grandfather’s contributions every time we drove into Birmingham on Highway 31 through Vestavia.

Dad was born in Birmingham, but sometime before his eighth birthday the family moved to south Alabama. It seems that after the Vetavia estate was completed in 1925, work was hard to get. Both of my grandparents were from Pike County, Alabama and my grandmother’s family owned a good bit of farmland north of Troy. As a boy I loved going to visit my great aunts and uncles, but I especially remember the day my dad let us walk through the house where he lived as a young boy. The house sat on a front section of my Uncle William’s farm, maybe a hundred yards from the Big House.

I must have been about eight years old at the time, which means my dad was fifty, but I could still sense his emotion as he showed us around. The walls were overlapped and unpainted wood. I’m pretty sure the roof was tin. And the floor was dirt.  Yes, the floor was dirt. The thing I remember most about that day was the tremendous amount of respect I had for my dad.  He had come a long way from this place, but this place had left its mark on him. Family. Hard work. An understanding of right and wrong. These were just a few of the marks he took from this place.

At some point after they moved to Pike County, my grandfather got sick. I never understood all of the details, but I do remember the story my dad told of the day his dad walked to town with him and his two brothers. He left them at the Alabama Baptist Children’s Home in Troy and boarded a train for Memphis, where he entered the VA hospital and later died of a brain tumor. It would be several years before my grandmother got on her feet enough to get the three boys from “the orphanage.” She had married the man who became the only grandfather I ever knew, and the newly reunited family moved about thirty miles to Fitzpatrick, a small community near Union Springs, Alabama. By this point the Great Depression was in full swing.

I remember looking at Dad’s high school annual when I was a young teenager. He was smiling in every picture. Every. Single. One. In spite of everything that had happened in his young life, he was a happy and well-adjusted teenager. His family was still poor and life would certainly bring him more challenges (World War II POW and a post-war car wreck), but those things shaped him rather than breaking him.

But nothing shaped him more than his personal relationship with Jesus Christ. I am thankful to Alabama Baptists for that reality. He became a follower of Jesus during his years at the Alabama Baptist Children’s Home. You might get the idea that my dad was perfect. To me he was, but i also know that, like all of us, he was human and in desperate need of mercy and grace. Thank God he found it in Jesus, the one whose name is above every name (Philippians 2:9). I am thankful for the name my dad gave me, but I am more grateful that he led me to faith in Christ… That he passed on the name of Jesus. “For there is no other name under heaven given among men by which we must be saved” (Acts 4:12). I gave my son a good name too. The name of Jesus. In fact, the name of Jesus is not just a good name. It’s A Beautiful Name.

4 thoughts on “A Good Name”